We have watched all the plant-based documentaries and yes, The Game Changers film was game-changing in our opinion. What else would you expect from a movie by James Cameron, Arnold Schwarzenegger, and Jackie Chan?

This isn’t your typical plant-based food documentary, and we love that it’s not a vegan propaganda film.

What we liked was its focus on elite athletes and the human performance benefits of eating more plant foods. Too often, vegan films shadow incredibly sick people who are hard to relate to or seems too feminine.

No spoilers here, because we recommend that you watch it. Here are some of our biggest “aha” moments and controversial points from The Game Changers documentary.

We are not vegans. Actually, we get nervous when our clients tell us they’ve decided to go vegan. It’s a challenging diet.

Still, we loved this documentary because it compels individuals to primarily eat plants while eliminating processed, tainted animal products.

We believe that quality meat, fish, poultry, eggs, and dairy belong in a healthy diet. The issue is that only 3% of Americans are eating animal products that tick all the boxes – grass-fed, hormone-free, no antibiotics, free-range, etc.

How can we improve the quality of our animal food production without first decreasing the quantity we are eating?

We can all eat more plants, and the Game Changers film shows us why this is so important.

Why We Won’t “Debunk” The Film

If you have already watched the film, let us know and share your thoughts in the comments.

Documentaries like The Game Changers are not a summary of scientific findings. That would be far too boring for any producer to turn a profit. The purpose is to compel people to become vegan. We that end-goal, bias is to be expected.

It’s true, some of the information in the Game Changers documentary is lacking scientific evidence. Before writing this article, we fact-checked and enlightened ourselves by hearing arguments from both sides, pro-vegan and anti-vegan.

After a dozen hours reading articles and listening to podcasts (like 8 hours listening to the Joe Rogan Experience), the below takeaways hold strong. Additionally, it’s interesting to note that there two things that everyone agrees on.

1. Plants are healthy and should be the majority of the diet.

Lastly, many of the people who debunk the Game Changers are wrong themselves. There was a 4-hour episode on the Joe Rogan Experience with a guest debunking the film.

Next, they invited James Cameron to join them on the show for a debate, and he un-bunked (it’s a word… look it up) the topics discussed.

You can listen to the full episode here. Or, read about the debate on the Wikipedia page.

These “Aha” moments, in our opinion, are strong evidence that eating more plants is highly beneficial.

The Game Changers film explained why soy doesn’t raise estrogen levels. Vilified in the early 2000s by studies showing that soy disrupted male hormones in mice, these effects were never demonstrated in humans.

While still debated, newer studies show that the phytoestrogens in soy actually block estrogen absorption, by taking up their place in our body’s estrogen-receptors.

We also wanted to put it out there that you never even need to eat soy if you don’t want. It’s like a meat-eater avoiding lamb… no big deal. There’s plenty of other plants out there. For us, the Game Changers soy estrogen finding was game-changing.

Eating veggies help the arteries stay clean and clear when compared to meat and dairy. They also reduce inflammation which means, for athletes, faster recovery times and fewer injuries.

Blood flow is blood flow, which brings us to the Game Changers penis takeaway…

In The Game Changers movie, Dr. Aaron Spitz, author of The Penis Book, conducts an informal test with three college athletes. The test shows their increases after eating a vegan meal vs. a meat-filled meal.

While this casual study is light on the data, the results are quite significant and nearly immediate. The Game Changers penis takeaway makes sense since erectile dysfunction can be a precursor to heart disease.

I look forward to seeing the replication of studies and will update this post with new studies.

4. Eating plant-based for 7 days can reduce cholesterol by 100 points.

The Brooklyn unit highlighted was given vegetables for a week and tested for their blood pressure and cholesterol, to predictably positive results.

While this is still a small sample set, we’ve seen the same thing in our personal lives as well as many of our clients who take our Couple’s Clean Week Bet.

5. In the US, meat consumption is 3X the global average..

And, as of February 2019, the US ranks number 35 on the list of the world’s healthiest nations. Shifting away from meat would save 1 million liters of water, per person per year, and reduce agricultural emissions up to 73%.

For the environmentally friendly people out there, this is a good reminder that even cutting meat out of a single meal a week can make a difference.

Why “Light On Science” Doesn’t Phase Us

The reason why modern diets are so confusing is because of the media. Google whatever you want, like “do carbs make you fat?” and you’ll get a million conflicting answers.

Dig a little deeper, and you’ll find the cattle industry with their hands in a few “studies,” pro-keto dieters spewing their thoughts, and the hardcore vegan reminding everyone that they’re killing the world.

Many people smash documentaries like The Game Changers because they are “light on science.” Well, the US is one of the most scientifically advanced nations in the world and this is where we stand:

Health and fitness is a trillion-dollar industry, but 70% are overweight and 40% are obese.

Does it seem like science is reliable? This is why we always encourage self-experimentation. If something sounds beneficial, give it a try and journal about the changes and challenges you experience.

This is what we recently did with intermittent fasting. At first, it sounded extreme and how could we not eat breakfast?? After three months of self-experimentation we were hooked, and finally, two years later, we created this Intermittent Fasting How To Guide to help others make the transition successfully.

Our Call To Action

There’s no doubt that The Game Changers documentary has an agenda to promote a plant-based lifestyle. Some of the data is light, but the film has been endorsed by the American College of Lifestyle Medicine, the Special Operations Medical Association (SOMA), the Defense Health Agency (DHA), and the Green Sports Alliance.

The stories we enjoyed most are of the professional athletes who saw measurable gains when changing their diet from meat to vegetables. It was also enjoyable to see the manliness of eating a lot of meat taken down a notch with the Game Changers penis finding.

For us, the biggest success of this film is simply showing mainstream America that you won’t shrivel up into a twig if you eat more plants.

Our CTA for you is to watch The Game Changers film and discuss it with your partner, family, and friends. Instead of listening to the recommendations of pro-vegans or anti-vegans, try eating mostly plants and document how you feel.

I have questions or thoughts. What do I do?

Share them in the comments below, and we’ll get back to you as soon as possible and add your recommendations to this article accordingly.

Thanks for reading, and thanks in advance for your comment!

As engineers with ten years of health coaching experience, we needed to create a data-driven way for our clients to sustain weight loss. The number on the scale matters for weight loss, but other numbers are significantly more important. 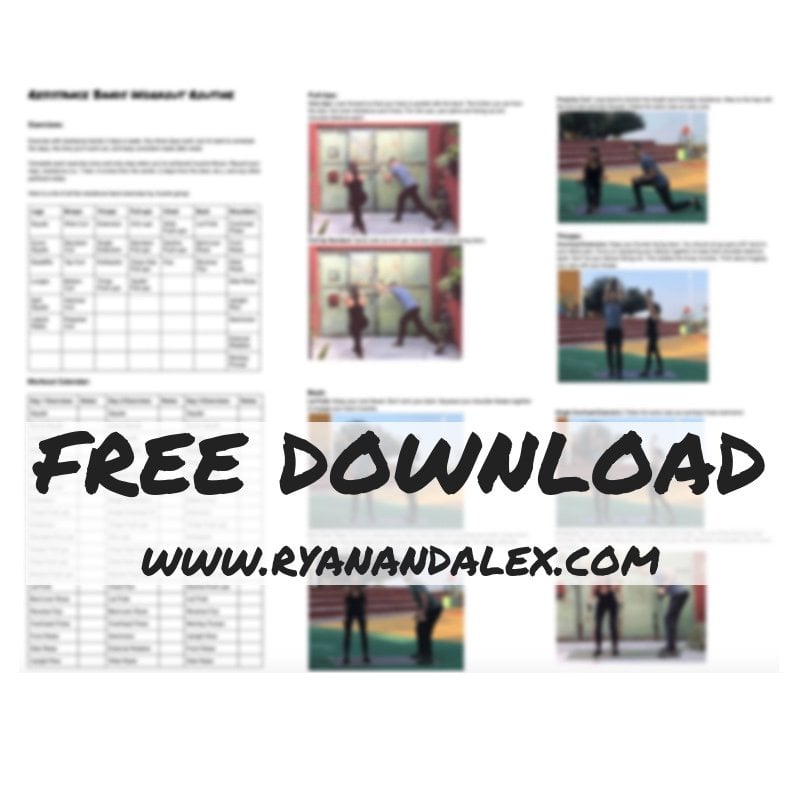 - Videos of 55 leg, core, back, arm, shoulder, and chest exercises with resistance bands.
- Professional instruction to ensure proper form.
- An 8-week calendar and weight tracking sheet with built-in variety and periodization.
- Access to all future revisions to the program.
- Support. We're always here to help.