We introduce to you our first Couple Goals Interview with the power Duo behind @halfhalftravel.

Becca and Dan are creative photographers and bloggers, based in NYC, who have a unique way of capturing their travels, from one point of view to the other’s.

We asked for their expert tips on staying healthy while living (for months and months) out of a backpack!

couple goals: staying fit while living out of a backpack

1. Can you give a quick overview of how you two met?

Sure! We met on a dating app in September 2015 and didn’t wind up meeting util late December 2015. After our first date, we saw each other again and again!

Within our first few dates, we stopped going out to eat and drink, and we started cooking together. This is how a lot of our relationship formed in the kitchen. 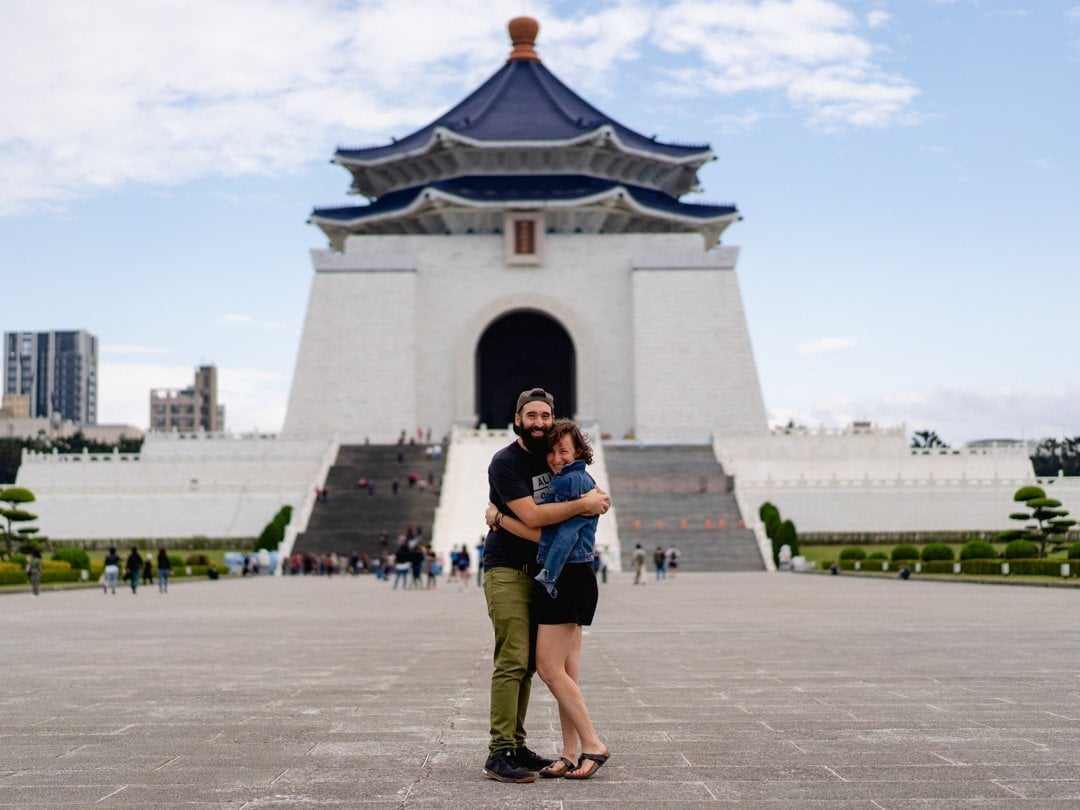 2. Can you describe how you kept connected while long-distance dating and the birth of @halfhalftravel?

During our first year of dating, Dan did a remote work-travel program with Remote Year. Throughout our long-distance year, we stayed connected through Whatsapp, email, video chatting, and postcards (yes, we’re old-fashioned — we love mail!).

We also had five visits, with Becca visiting Dan in different parts of the world four times and with Dan coming home to NYC once.

We came up with the idea for the project after Dan left the US in May 2016 for one year to travel in Europe, Africa, and Latin America as a freelance front end engineer and travel photographer.

Becca, who previously lived abroad in China and Hong Kong, wanted to think of a project on which they could both work together while apart, despite the distance.

After stitching together a photo of their two cups of coffee (Becca’s in Manhattan and Dan’s in London) and receiving a great response from her friends on her personal Instagram account, the two whipped up a few more images and started @halfhalftravel, which has gained popularity worldwide.

3. You’ve both traveled a lot separately. Were there any compromises that you had to make or imbalances to overcome once you started traveling together?

Yep, that’s true — we’ve done a lot, apart from each other! Becca spent two and a half years abroad in total (2010-2012), in Hong Kong and in Shanghai, China, totally on her own schedule and with her own habits and hobbies. For Dan, it was the same!

It’s a good thing that we started traveling together on vacations during Dan’s year abroad with Remote Year so that we learned each other’s travel styles. The only real compromises we had to talk about was factoring in Dan’s time to run and train for marathons, but would you believe it? After some time together, Becca started using that time to try running, also!

The other imbalance between us is that we have slightly different eating habits. There are things that make us both happy, like tacos. If we find tacos, we are set; however, with Dan’s new vegetarian preferences and Becca’s intolerances to gluten, dairy, and soy, we sometimes can’t find a restaurant to eat in while we’re abroad.

This is where cooking comes in, which is great because we love shopping for produce (just like Ryan and Alex). We talk about all these habits in the @halfhalftravel blog.

4. How do you practice self-care, healthy eating, and/or fitness while living out of a backpack?

We’ve maintained fitness in a few ways, and even collected all our healthy habits and put them into a list! Most of them have to do with traveling long-term and treating travel like a lifestyle, not a vacation. The longer we stay in a place, the more options we have and the more habits we can build.

In Lima, Peru, where we spent a month, Dan was a member at the CrossFit gym and Becca had a month-long unlimited yoga pass to a local studio chain with several locations in downtown Lima. We both were working out around four times a week and felt our best.

We did this system also in Medellin, Colombia, with Becca waking up early to get to 8 am yoga sessions, and with Dan sacrificing other nighttime activities to go to a 7 PM or 8 PM CrossFit class.

For healthy eating, that’s another thing that we can accomplish with the longer of an amount of time that we stay in a single place. We’ve even gotten our own evidence for this — when we’ve moved around super fast and had one or two nights here, and then one or two nights there, we don’t have time to shop at markets or grocery stores between transport and cramming in our activities.

With two weeks to a month in a single place, we find the markets we like, the supermarket with the freshest produce, a way to invest in olive oil (this can be a delicacy) and a travel-sized spice rack that we create.

If we move along too quickly, we sacrifice these elements and wind up eating out, skipping exercise and maybe not even sleeping enough.

“Within our first few dates, we stopped going out to eat and drink, and we started cooking together.”

“The only real compromises we had to talk about was factoring in Dan’s time to run and train for marathons, but would you believe it? After some time together, Becca started using that time to try running, also! “

“We both were working out around four times a week and felt our best.” 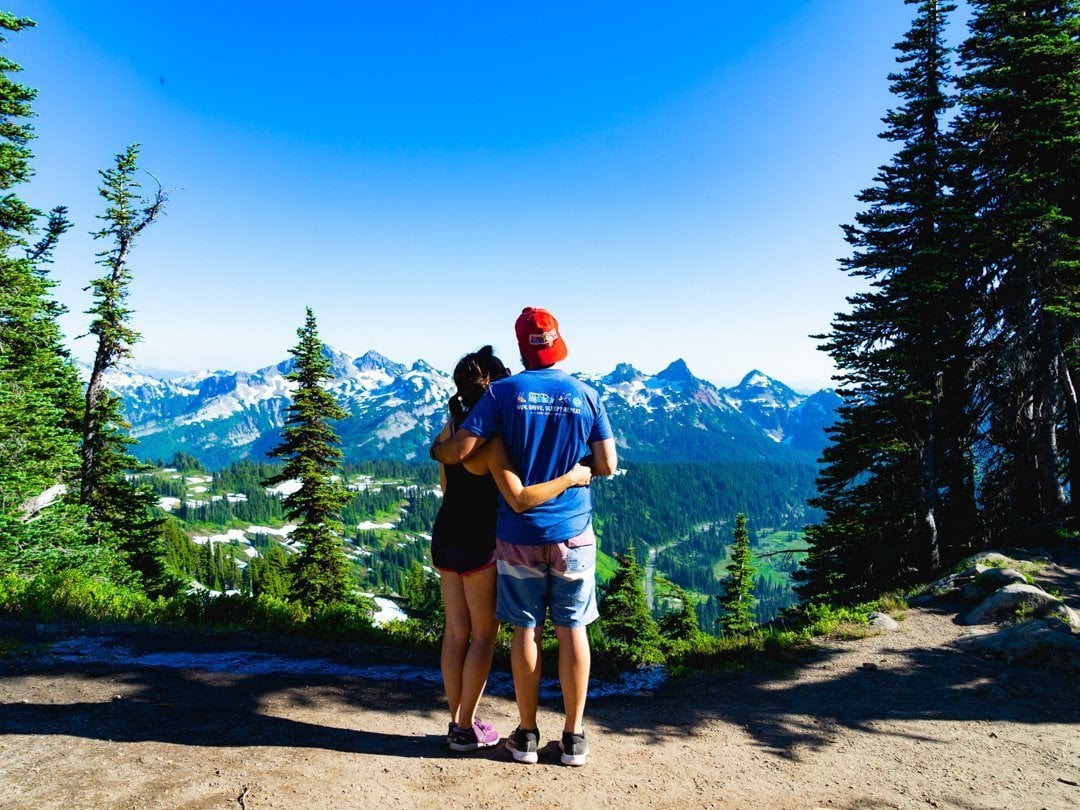 5. You’ve traveled around the world — what health practices have you learned from other cultures that you now practice?

Eating around the world seems kiiiind of standard and similar to how we eat at home until you get to Asia. It’s here that Becca learned to drink ‘kai shui,’ or ‘hot water,’ in Chinese, as a way of warming up your insides. This is said to cure anything fast, in China, and most people will instruct you to drink hot water if you say you’re feeling under the weather.

Next is saving drinking any type of liquid until the end of the meal. This is a practice mostly from South Asia but seems to be practiced a bit in East Asia as well. If you save all drinking (of any liquid or beverage) until you’ve finished your solid food, it’s better for digestion. This practice allows the body to direct energy toward breaking down food, with liquids coming in afterward.

Lastly, a good one from East Asia yet again is to avoid foods that are very cold. If you think about it, this is very logical, considering that the body is 98.6 °F or 37 °C. Shouldn’t it come as a shock to the body if you put something near-freezing inside, even if you want to cool off?

After traveling around Asia, you start to notice that very few foods are served cold, and most are cooked. People in the West may scoff at the fact that Chinese food, for example, is always fried, steamed or cooked in some way, but the truth is… the body has an easier time breaking down foods that are hot and cooked.

6. Have the benefits of getting healthier together spilled over to other areas of your lives?

We’ve definitely woven health into our vacations, even when we aren’t working. We rarely have dates where we go out for drinks. In fact, our Valentine’s Day is usually cooking one of our favorite meals and spending quality time in the kitchen together.

On vacation, one of the first things we do together is look up the nearest supermarkets so that we can be sure we’ll be snacking on fresh fruit.

7. What advice do you have for couples who want to start traveling together?

We have a guide written for this too, and it’s called “Tips for Taking Your First Trip Together as a Couple”! We thought of a few guidelines that helped us when we took our first trip together, even if we didn’t discuss them out loud. They wound up coming up at any given point.

We suggest communicating about your vision for the trip with each other, being flexible and be prepared to make compromises, talking about a trip budget, showing that you’ve helped to prepare by contributing suggestions for your partner and being transparent and honest about how you’d like to share the trip on social media.

Social media’s a big one, as everyone has a varying perception of what should be shared and what shouldn’t, what to keep private between the two of you and etc.

“If you save all drinking (of any liquid or beverage) until you’ve finished your solid food, it’s better for digestion.”

“In fact, our Valentine’s Day is usually cooking one of our favorite meals and spending quality time in the kitchen together.”

In this couple goals interview, we learn how fitness and healthy eating is crucial even for travelers. We’ve highlighted key takeaways in the Couple Goals Quotes sections. Here, we’ll leave you with ideas on how to be couple goals.

Cook food together. It’s a fun and healthy way to bond and spend quality time together.

Consistently working out, at least 4 times a week, is one of the secrets to lifelong fitness.

Save liquids for after your meal. This practice will help with digestion.

Becca & Dan are a Brooklyn-based photographer and blogger couple who recently returned from nearly 10 months of traveling across four continents, from South America to Southeast Asia. They started their Instagram (@halfhalftravel) while they dated long-distance for 12 months during 2016-2017 and traveled apart from each other. Now, back together in NY since summer 2017, they capture their travel through their signature photography style and provide tips, hacks and tricks through their writing on halfhalftravel.com. You can talk to Becca & Dan about working out on the go, the best markets for fresh produce in Colombia, Mexico and Vietnam, their favorite ways to take photos and of course, their favorite gear and gadgets for every trip. 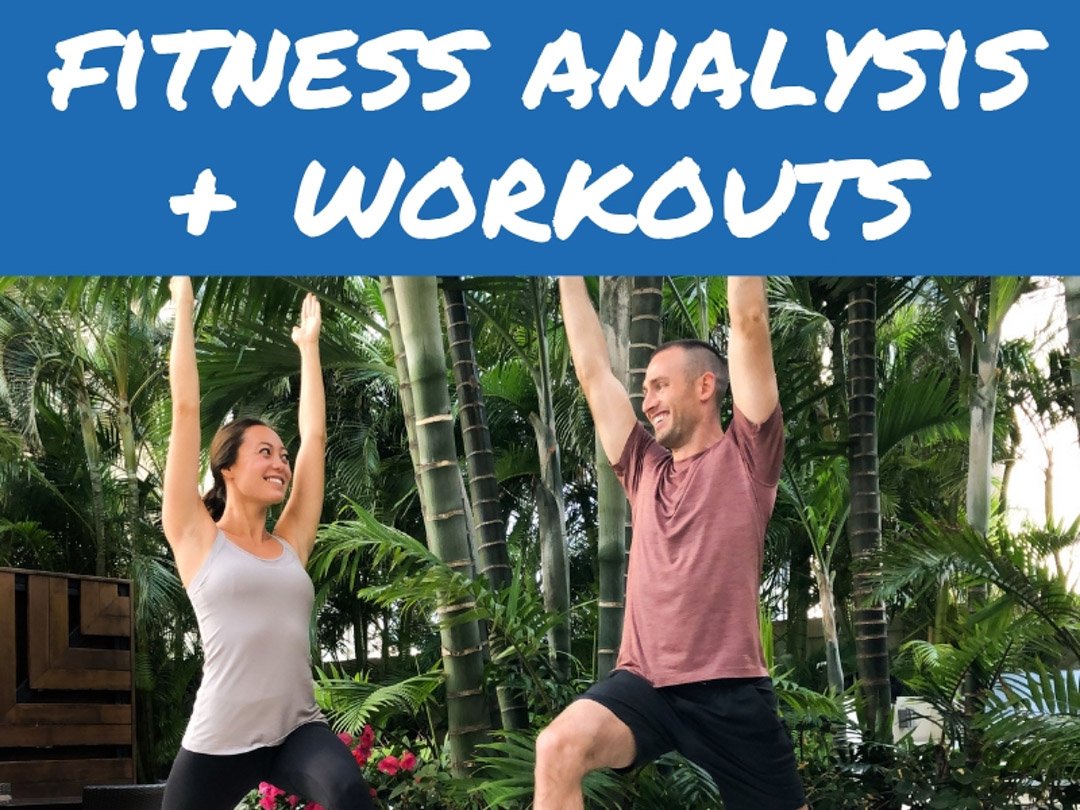 How fit are you really? Is your time at the gym and going out for a jog really paying off? Take our fitness quiz and learn about the tools that Ryan and Alex use to commit to working out consistently. As engineers, they made it as simple and efficient as possible.

LEARN MORE
Or, start the conversation.