What’s the difference between the two Meg Ryan films, When a Man Loves a Woman and When Harry Met Sally?

Give up? Well, one of these can cut your chances of divorce in half while the other one won’t.

We’re not kidding, and here’s the data to back it up. Keep reading to learn the best movies for married couples.

The inspiration for this article began after we watched Couple’s Retreat. The rom-com prompted meaningful discussion about the couple’s relationships, challenges they were facing, and how they repaired their marriages by the end of the movie.

We wanted to find more movies like Couple’s Retreat that were not only enjoyable but would strengthen our relationship.

The Data Of Couple’s Movie Therapy

A University of Rochester psychology professor, Dr. Ronald Rogge, found that some good movies for couples can be just as effective as marriage therapy.

Dr. Rogge and his team created a study for 174 engaged and newly married couples in Los Angeles. He divided them into three groups.

The first group received a list of relationship-centric movies and told to watch five films and discuss.

The final group did nothing.

Three years later, both the first and second groups who had either discussed the movies or went to marriage workshops were twice as likely to be still married versus the control group.

That’s right. There are good movies for couples that can cut your chances of divorce in half.

The key is not to watch random movies — many divorcing couples watch movies. The essential part is to find films that focus on relatable problems within a marriage.

For example, the Meg Ryan movie, When a Man Loves A Woman, addresses alcoholism and creates meaningful dialogue for couples.

However, another Meg Ryan film, When Harry Met Sally, is an ineffective choice, as it portrays an idealized, romanticized, and unrealistic relationship.

The Couple’s Retreat movie addresses everything from sexual intimacy struggles to infidelity to last-ditch efforts to save a marriage.

Finally, it’s not just watching the movies. It’s the discussion that follows that is therapeutic. Before we list other movies like Couple’s Retreat or When a Man Loves A Woman, these that the questions you need to discuss.

After watching the movies, the couples were asked to discuss several questions, such as:

Since Dr. Rogge’s 2014 study, more than one thousand couples have gone through his movie therapy program. Below are the top 10 films found most relevant to couples while simultaneously sparking the best conversations.

Our Recommended Movies For Couples

As mentioned, we focused on the data rather than giving you a list based off of movie reviews, blogger’s opinions, and our preferences.

Fortunately, Dr. Rogge had curated a long list of approved movies. So, we corroborated his list with our favorites to bring you our top 15 best movies for married couples:

Schedule Your Next Date Night Movie

Before you write off the value of “chick-flicks,” consider them for their instructional, relationship value.

Would you take a few hours to watch five of these movies over the next three years to cut your chance of divorce in half? Yup, we thought so.

So, are you wondering why movies are as effective as marriage workshops?

As Dr. Rogge wrote up in his study findings, “The results suggest that husbands and wives have a pretty good sense of what they might be doing right and wrong in their relationships.

Thus, you might not need to teach them a whole lot of skills to cut the divorce rate. You might just need to get them to think about how they are currently behaving.”

Based on the data, these are the best movies for married couples, which, in our opinion, makes them the best date night movies of all time! Since you and your partner are excited about engineering your best lives, you should also read one of these highly recommended personal development books together.

Comment below on which of these films is your favorite. Or, is there a movie you would add to our list that created deep conversations with your partner?

Our flagship program. Transform your mind, body, and marriage using small, systematic steps. These tried-and-true techniques have been taken from our research and personal experiments to reconnect, get healthier, and add spontaneity into your relationship. 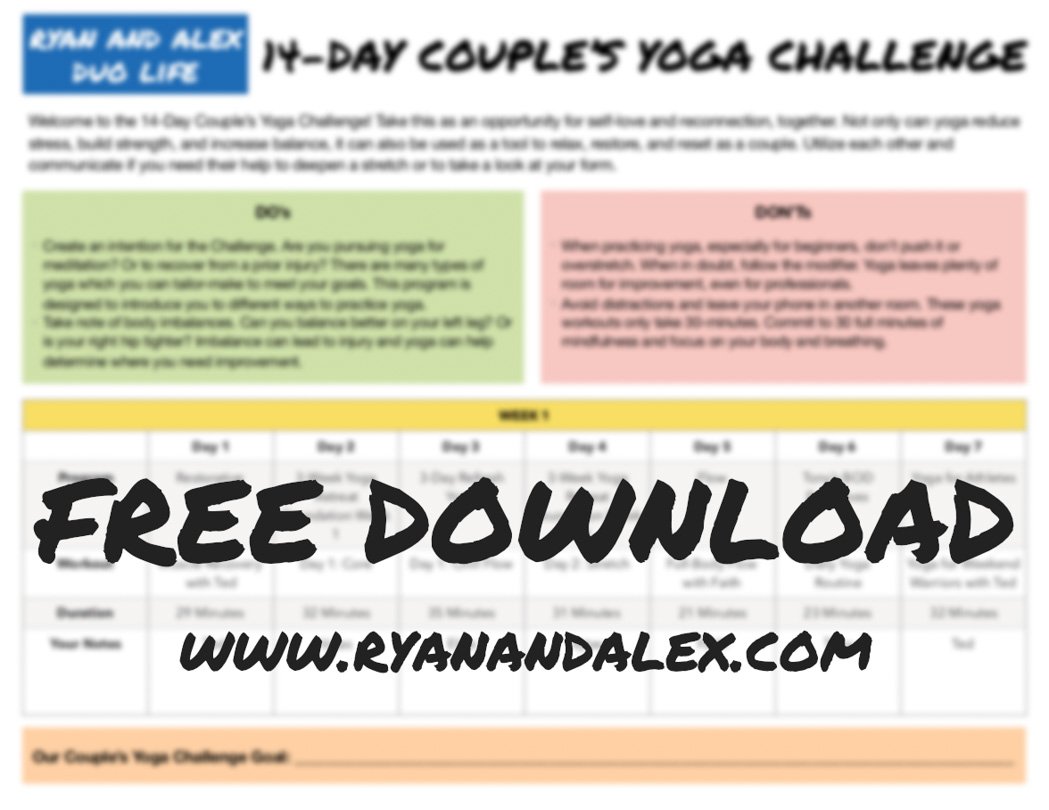 This challenge aims to reconnect you to your health and help you appreciate your body. Practicing yoga as a couple is an opportunity to connect and be present in a way apart from your normal, busy lives.

The customized yoga workout calendar was curated by us to expose couples to a variety of yoga styles and instructors as well as practicing yoga from home.